A NOTE ON PRICING

We can all go on line to see German Shepherd puppy prices from $200 to $7,000. The layman logically asks “What is going on? What makes this pup so cheap and this pup so expensive?” In the great European tradition, breeding standards were set more than a century ago. In the one to two-year-old period, the pups are X-rayed to see if the hip (ball and socket) joints are properly formed or if there is an abnormality called dysplasia, likewise, for elbows. Later blood tests were added to discover atypical genetics, mostly the horrible DM disease, which is actually very rare because it is a recessive gene. A breeder not uncommonly can have the smartest, most athletic, sweetest, most beautiful Shepherd only to discover that she has a left hip that is less than ideal. Perhaps the socket is too shallow. That dog cannot be bred. Start the two-year clock all over again.

The discipline to adhere to such a standard results in a line of dogs that have superior health throughout their lives. To not follow that standard or to be ignorant that such a standard exists exponentially increases the likelihood of a tragic premature ending with enormous vet bills. We are now 50 generations into such standards and we haven’t seen serious health problems in decades. In the interests of science and transparency, we must note that one breeding in about 2700 can have spontaneous dysplasia and environmental conditions can cause cancer and other health problems. Additionally, we have seen zealous owners start hard-pounding training too early. This can cause joint damage in a healthy pup. We avoid what is in our power to avoid. Clearly, an intelligent person can see that this practice doesn’t come for free. In this world of the BEST GSDs, we are moderately priced.

To be clear, no well-bred shepherd can be had for $800. Expect to spend several thousand dollars.

So how about that $800 pup? As I see it, Harry meets Sally at a bar and over a gin and tonic, as they decide they will breed so they decide their dogs will also. Sally thinks it’s a great idea because Harry said, “Did you know them-there pups can bring north of 500 bucks?” Neither of these newly-minted “breeders” would know a progesterone test from a gin and tonic. They have no clue about their dog’s hips or genetics. It is usually a one-off event. Buyer beware! You will have this living, feeling companion for roughly 12 years.

Once the health issues are handled, we match sire to dam with the consideration of not being something silly like the length of the tail (a show dog issue) but traits such as demeanor and ball drive. When I say German Shepherds are highly evolved, I’m dead serious. This is why humans are as dedicated to the breed as they are to us – it is the least we can do for these magnificent loving companions! 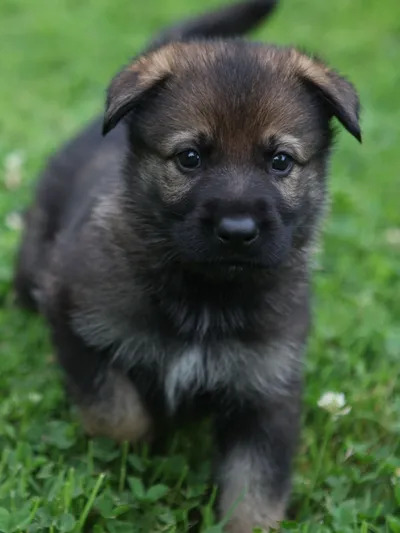