We have searched throughout Europe to bring the absolute best German shepherd bloodlines to our kennel.  We have high standards in temperament, trainability, conformation and health.  We strive to achieve German shepherds that fit the proven mold set for the by the best European breeders!

Cruze Wil Z Hipolitowa, DOB: 5/8/2018 Bred in Poland. He is a stunning black and red German shepherd. He is a standard-sized male at 75 lbs.
Cruze is a beautiful bear of a long-haired German shepherd! Coming from an exceptional Polish bloodline, we were truly blessed to find and add Cruze to our dog kennel for German shepherds! He is a trained German shepherd who has a great alert bark, but deep down, he is truly just a loving teddy bear who just loves to be included in whatever you are doing. The ultimate companion dog for many buyers, Cruze has a low-ball drive, and would prefer treats as an incentive when training if you please! Cruze is a friendly German shepherd at his happiest when he gets the nod to go for a nice car ride to see new sites with his people! Cruze is good with children and small dogs and tolerates cats. OFA HD Good ED Normal DM N 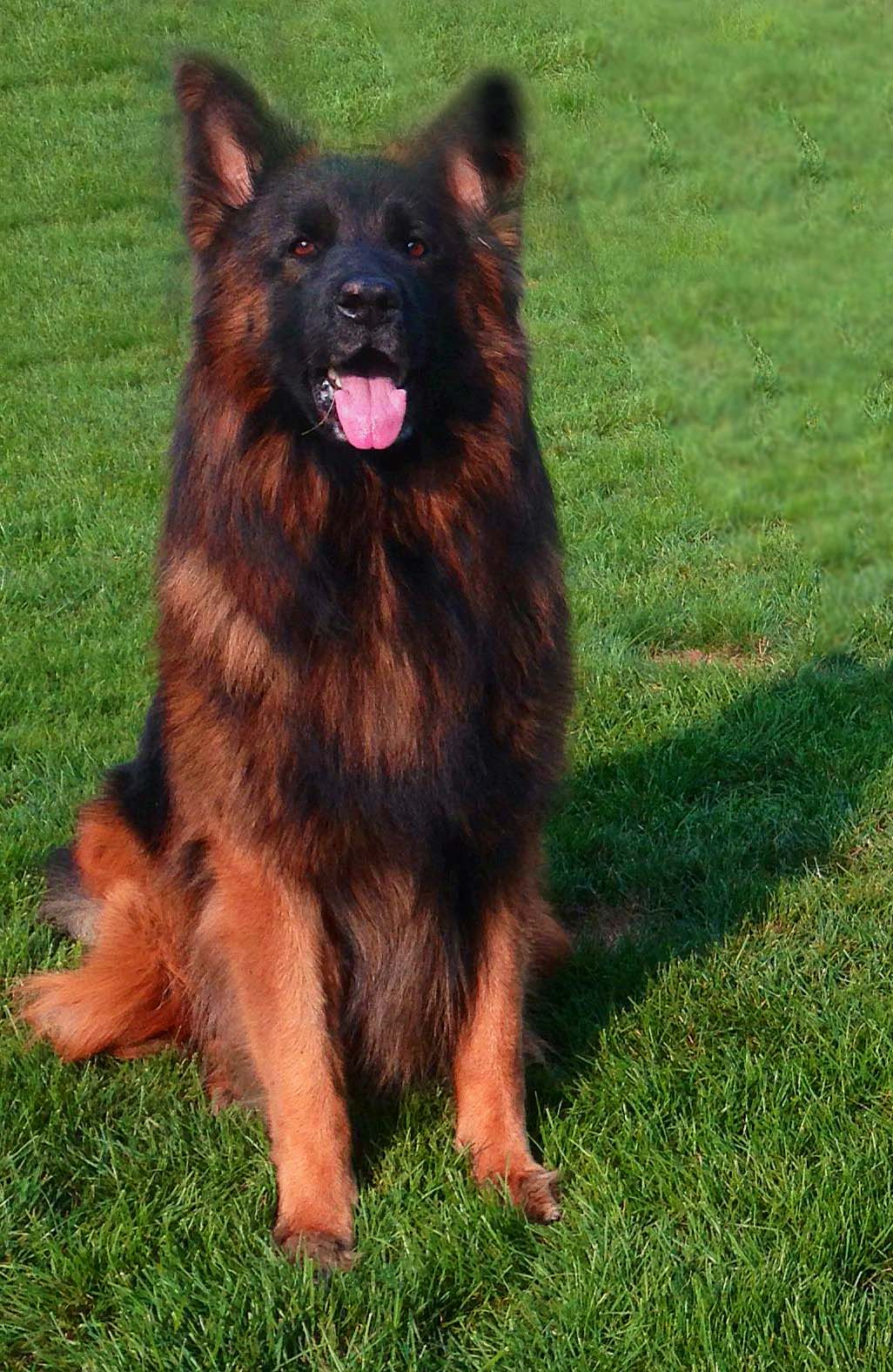 SG Patton European K9 Training base BH ZVV1 DOB: 4/8/2019 Patton was bred in the Czech Republic and is a trim, solid 75 lb. He is a sable stock-coat German shepherd; He can produce black pups but not long-coat pups. Patton is a structurally perfect, beautiful young male. He greets strangers with a strong bark, and a reserved attitude until he is commanded that it is OK. Patton has a high ball drive and is a playful German shepherd! He is the son of the great German champion Knox Vom Tollhaus, 2019 GSP National IPO3 Champion!
We waited for more than a year for our new sire, Patton, to finish his field trials in the Czech Republic so he could be shipped to us. His father, Knox Vom Tollhaus is probably the only male we know of that might surpass our all-time greatest sire, Quantum.
Patton has a wonderful friendly disposition. He gets along with other dogs well. He is very active, has a great play drive, and is a protective German shepherd. In protection training, his grips are strong and hard. Patton’s medical credentials are impressive. His hips and elbows are scored A1, he is DM clear. He is suitable for breeding for top sport dogs, family protection, search and rescue, or just wonderful, active family companion pups. HD A1 ED Normal Spine Clear DM N

Levi Northern Lady’s Leviathan, DOB: 1/16/2019. WE LOVE LEVI! He is one of ours. He is the son of Quantum x Anoshi. Quantum is a Schutz Hund German shepherd. He was the Number One IPO3 in the USA when he came to us. Anoshi is a granddaughter of Rommel and Mercedes Levi is a big boy at 95 pounds. That is not typical of Schutzhund lines but is typical of our original kennel. He is a plush coat German shepherd. Plush coats are real showstoppers. They are from a standard coat x longhair breeding. They are a bit more mellow. Levi is a friendly German shepherd with a winning personality. He has good ball drive (not too high) AND a balanced temperament. He has strong family protection instincts without aggression towards other dogs or people. That is what most of our clients want and THAT is what we produce the most of! Levi is a good working service dog. His OFA preliminary X-rays show good hips and elbows. 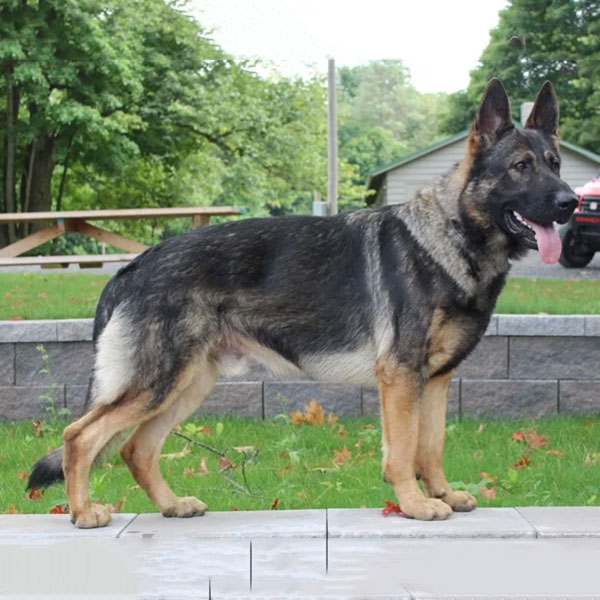 Ennis von Liebestropfchen, aka “Chewy”. Chewy is a 2.5-year-old black and red long-haired. Chewy is owned and graciously allowed to be used as a stud by our good friends and partner kennel Vom Liebestropschen German shepherds. He is from German lines, giving him good protective instinct, and superior trainability, paired with the beautiful rich black and red long-haired German shepherd coat. The Europeans, led by the Germans and Czechs, have held breeding qualifications high for so long that we rarely see any of the typical health problems plaguing large breeds. If you are not familiar with the longhair GSDs, I can tell you that they seem slightly calmer and less impulsive, A German shepherd temperament obedient than some more intense pure working line dogs may possess. It is counterintuitive, but they shed less than a standard coat. As to appearance, they are showstoppers! All this packed into a strong 95-pound frame, without an ounce of fat. Chewy has OFA excellent hips and elbows and is tested DM negative. Chewy has the sweet temperament that characterizes our dogs and has become the hallmark of our kennel. Simply put, Chewy is a family companion dog: calm, intelligent, sweet, and protective without aggression towards others. 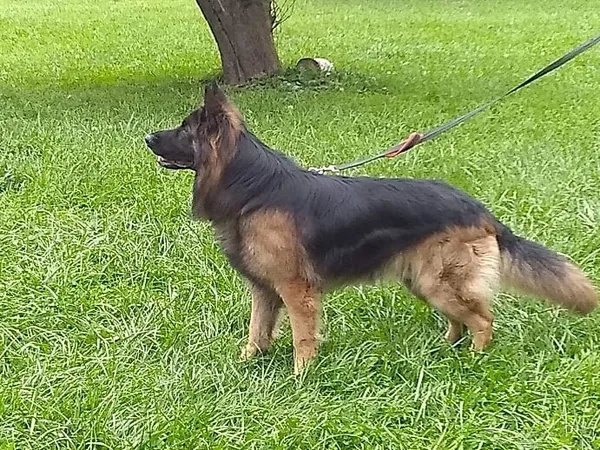 Want to know what a $40,000 dog looks like? Meet Quantum! We are very, very fortunate to get one of the best males Kraftwerkk9 has even produced.

At the time of this writing, Quantum is the youngest most highly trained male in the US; that is, the youngest IPO3. He is a handsome red sable with the legendary German Shepherd intelligent expression along with top performance!

Interestingly, he is not as big as Rommel but easily as powerful. He is medium sized and strong, with a tremendous head along with fantastic expression. He is absolutely non-aggressive with other animals and great with children. Quantum is totally self-confident and trustworthy in every situation. Importantly, he is second-to-none in natural drive to perform just like his famous father and grandfather. Athletic and quick to do anything asked of him, Quantum shows an excellent relationship with his handler in obedience with quick response to the commands. He has especially strong drive in protection work demonstrating full and super hard grips, intensive guarding in the “bark and hold”and after the out. He loves the ball and is highly motivated to do anything for it. Quantum is superior in all three phases of IPO tracking (decision making), obedience and protection. He shows absolute control during the stress of protection. Quantum has a highly acclaimed pedigree with optimum health and vitality along with unmatched performance. His hips and elbows are certified a1; DM clear. 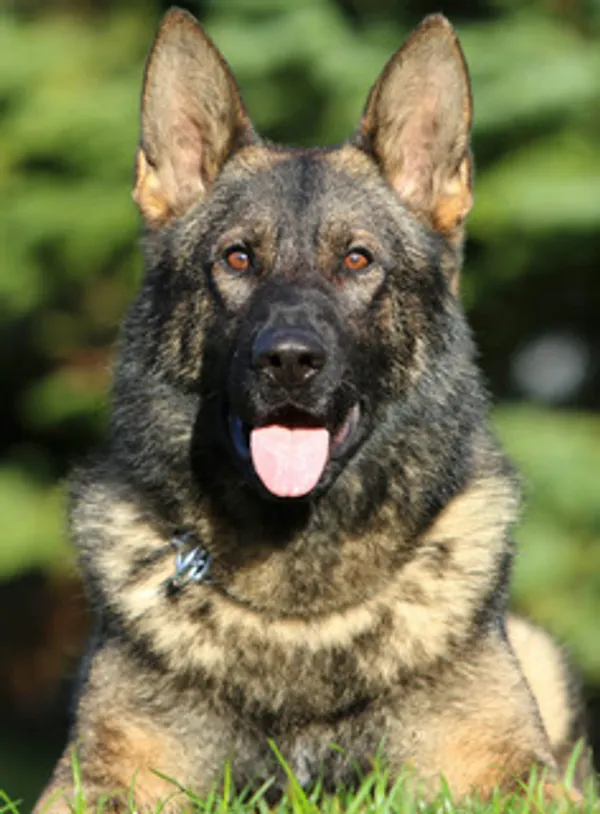 RETIRED
Rommel is an extremely large, handsome, true black sable with unusual pigmentation. He is desirable in every way. Rommel is likely the most beautiful black sable German shepherd you have ever seen, yet interestingly, not bred for beauty. He has the legendary intelligent facial expression of the German bloodlines along with the calm unwavering temperament and performance qualities of those European working lines.
His powerful movement accentuates his especially large bone structure and overall body proportions. His perfectly proportioned head along with his striking expression precedes his uncommon strength and speed as he runs toward you. His flawless disposition will win you over.
Rommel is the picture of his Champion father, Karlo vom Trumelo. Karlo is a rare SchH3, IP3, FH1, KKL1, 2012 PNW Regional IPO3 Obedience, and Protection Champion, impossible to make unsure with a rock-solid steady nerve base. As Wayne Curry describes him: “he shows the difficult to find balanced prey and German shepherd home defense drive qualities in protection. Totally reckless launches like a rocket and hits like a freight train on the long-distance courage test. Always full and hard grips on the sleeve with intense rapid-fire guarding in the blind. His remarkable ability to remain calm under stress combined with his energetic high-powered protection work sets him in a class by himself.” He earned the very difficult master tracking title FH1 showing his capacity to solve problems and concentrate. His pedigree is a highly respected combination of East and West German working lines known for optimum health and longevity and known to produce outstanding character, superior working qualities along inherent ability to handle stress.
Karlo’s sire is multiple high placing 3x BSP and WUSV competitor Dack aus der Königshöhle, with lines to the well-known East German great Manto vom Kahlenbach and the famous Lord Gleisdreick and Troll Nachbarschaft. Karlo’s mother, my Rommel’s grandmother is two-time BSP competitor Ina von der Kine, best in protection in LGA07 with 97 points with lines to Lord Schwartenzwinger, Chicco Fasanerie, Mink vom Haus Wittfeld, Greif vom Herkuleblick and Greif zum Lahntal. 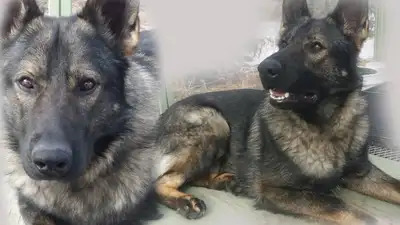 THESE SABLES “MORPH” AS TO COLORATION. 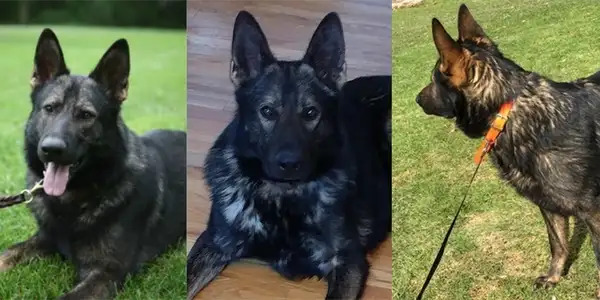 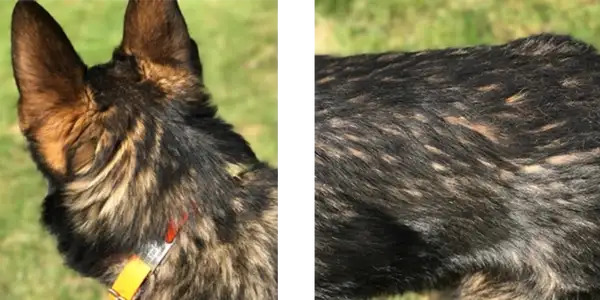